Vivid Vision is a VR system designed for people with lazy eye. We've been busy since we launched our system to eye clinics nation wide in April. Since then we've gotten back some early results from two studies, one here in the States and one in Europe. We are also planning more research with universites around the world. I also have an update on my own vision which I will share here for the first time!

A Quick Primer on Visual Acuity and Stereo Acuity 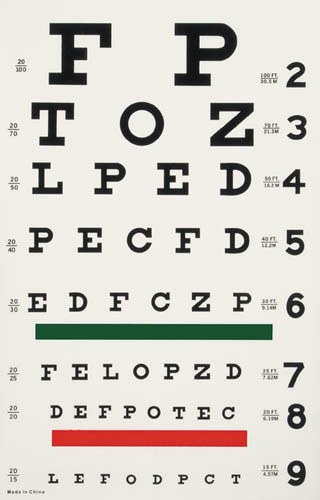 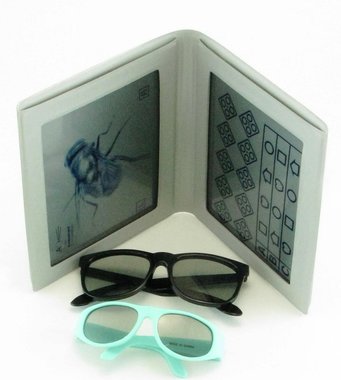 Visual acuity
is a measure of how much detail a person can see. It is typically measured as two numbers, e.g. 20/40. That means that the person was able to make out letters at 20 feet that the average person with good eyesight could make out at 40 feet. You can see a typical Snellen acuity chart that is used in optometry clinics everywhere to the right. We typically talk about improvements in visual acuity in terms of lines on this chart.

Best corrected visual acuity is the primary measure of improvement in amblyopia (lazy eye). Even with proper corrective lenses people with amblyopia will have worse than 20/20 vision.

Stereo acuity is a measure of a person's ability to perceive depth with two eyes. If you have poor stereo acuity you won't be able to see a 3D movie, will have trouble with magic picture illusions, and might have trouble playing sports. If something is close up your two eyes will see it on different parts of the retina, causing a disparity that can be used to calculate stereo acuity, which is measured in the angle between the two images, in arcseconds.

A normal stereo acuity is between 5-80 arcseconds, while someone with worse than 3500 is generally considered to be stereo blind.

Over the past year an eye clinic in Slovakia, the UVEA Mediklinik, has been doing a study on 15 patients with amblyopia using Vivid Vision. They had patients come into the clinic for eight 40 minutes sessions over several weeks. They found that 60% of patients improved the visual acuity of their amblyopic eye by 1 line or more on the eye chart. Some improved by as many as 3 lines. They also measured improvements in stereo acuity (depth perception). Click here to read more about the Mediklinik study.

These results are a great first step for us, but there are a lot of questions that can't be answered with only 15 patients. That is why we are doing a larger, more controlled, study at UCSF.

Our study at UCSF will have 50-60 participants. We will monitor each participants vision for 6 weeks while they use the control and/or software and then for another 5 months afterward to see how their vision changes once they stop using Vivid Vision.

We are still looking for participants with amblyopia in the Bay Area, so if you are anyone you know might be interested in participating please contact us.

Changes in My Own Vision

Before I dive into my most recent measurements, I'll first give a quick history of my vision and how it has been changing since I started building Vivid Vision. My visual acuity was measured as about 20/70 in my weak eye when I was younger.

I first started working on Vivid Vision (back when we were still called Diplopia) in December of 2013. At that time I had no stereo vision (worse than 3500 arcseconds), I couldn't perceive depth at all.  I finished a small proof of concept in VR that later became Diplopia, and I used it to see in 3D for the first time in my life. I could only see depth while in virtual reality. By the middle of January 2014 I started to notice changes in my vision outside of VR too.

At first I only had stereo very, very close. The first thing I saw in 3D outside VR was the keys on my keyboard. At this point I decided it was a good idea to go talk to an optometrist about it, and towards the end of January I went to see my eye doctor who measured the vision in my weak eye and told me it was 20/50. At this point I moved to San Franciso, and my vision kept improving. By June of 2014 I got another measurement of 20/40 and it seemed like progress was slowing down. By this point I had pretty good stereo vision, about 200 arcseconds (normal is anywhere from 5-80 arcseconds of stereo).

Fast forward to last month, when I am visiting my home in Michigan and I decide to get another set of tests and some new glasses. My most recent results measured my weak eye at about 20/25, and my stereoacuity at about 150 arcseconds of stereo! Since the acuity in my weak eye was limited by my previous prescription I'm hoping that the new prescription will let me improve my stereoacuity further.

The progress with my own vision has been great, and I've noticed the changes in my day to day life, but we don't want to stop with just this one case. These initial results from Slovakia and UCSF are showing good evidence that it works for other people with lazy eye as well. We will continue to collaborate with awesome scientists who are helping us explore the full potential of our system.

Are you a patient interested in using Vivid Vision?

Find a Vivid Vision Provider near you!